The European dream : how Europe’s vision of the future is quietly eclipsing the American dream 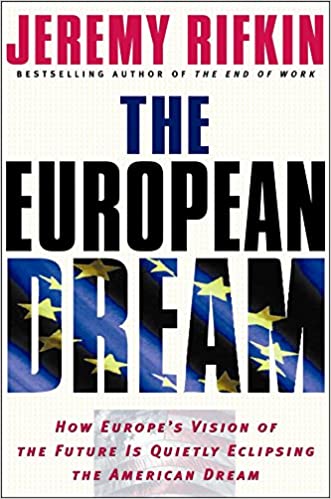 The subtitle of this book sums up the content very well. The American Dream, traditionally residing in individual achievement for those who commit themselves to hard work, no longer seems to inspire.
Rifkin argues that the American way of organising life, liberty, and the pursuit of happiness is not necessarily the best, as Americans spend increasingly more time at work, receive lower salaries and social benefits, have lower life expectancy, and less time for leisure. In contrast, according to Rifkin, Europeans enjoy a better quality of life and the European Dream thrives in a society in which individuals find security not through accumulation of wealth but through the society's inclusive environment based on sustainable development, cultural diversity, respect for human rights and peaceful coexistence.
Rifkin asserts that the European Union is the first transnational government in history and its example will likely be followed by others. However, the author acknowledges that to extend the European Dream to the rest of the world would require the spread of a universal morality, entailing the will to fight for universal human rights.