In Europe’s name : Germany and the divided continent 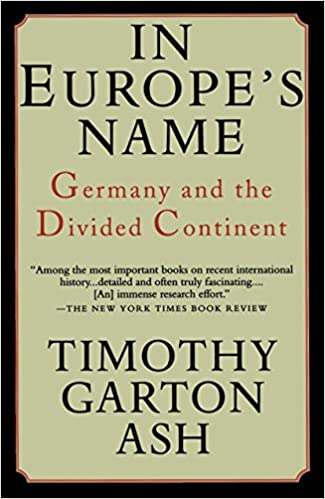 In Europe's name' provides a detailed insight of three decades of German foreign policy, from the building of the Berlin Wall (1961) to its fall (1989). Timothy Garton Ash, who had lived in Berlin and had travelled widely through Eastern Europe, has drawn up a meticulously researched and referenced account of (West) German foreign policy and diplomacy towards the post-World War II East-West division of Europe.

The analysis literally concentrates on words and deeds of political actors up until German reunification. Indeed Ash's method of choice is to scrutinize their rhetoric, using an abundance of quotations from press and archival material as his basis, as well as interviews with key actors, such as former chancellors Helmut Schmidt and Helmut Kohl, or former Foreign Minister Hans Dietrich Genscher. The wealth of sources makes this book a true testimonial (Zeitzeugnis).

The book title itself ('In Europe's name') is an allusion to Garton Ash's central thesis: He argues that German diplomacy towards the East, which West German leaders presented as an endeavour to reunite 'the divided continent', was largely triggered by their own national interest to reunite Germany.

The author illustrates, with numerous statements by West German politicians, the degree of compromise undertaken with the Soviet Union; and how much effort West German leaders who, guided by reasons of state, invested in diplomatic dialogue and trade relations with Communist regimes ('détente') in the hope of a top-down transformation ('Wandel durch Annäherung').